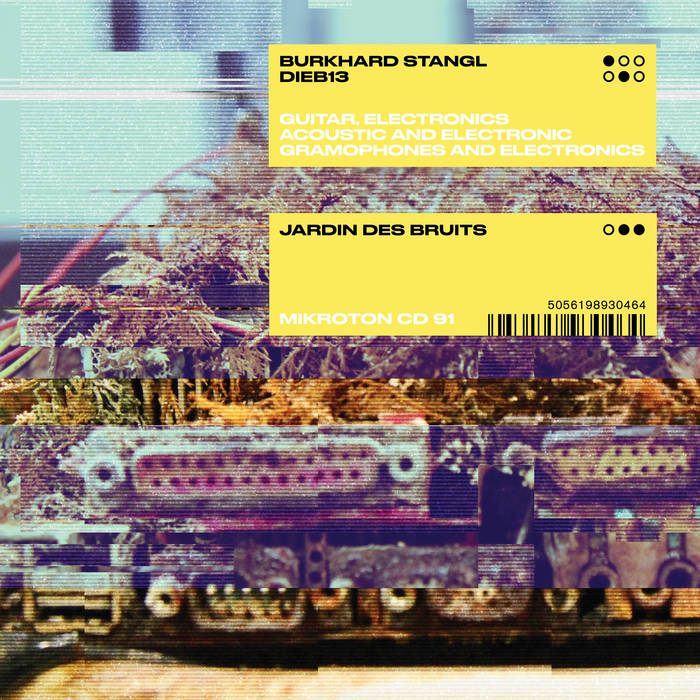 Burkhard Stangl and dieb13 live and work in Vienna, both being long time protagonists of the local scene as well as travelling and collaborating with musicians from all over the planet. Many of those collaborations and connections have been documented on the double-CD compilation”klingt.org: 10 Jahre Bessere Farben” [mikroton cd 5 | 6] commemorating the first ten years of existence of named online platform, which was founded and is since being run by dieb13.

Burkhard Stangl needs no further introduction being a remarkable and highly acclaimed guitarist. He explores the full range of sonic possibilities on his guitar, its dynamic, harmonic, melodic and noisy spectrum. This adaptability allows him to get to work in a variety of musical contexts, from collective imrpovised music projects like Polwechsel (until 2004), Efzeg and Schnee to written contemporary music for various ensembles and from solo works to collaborations with Angélica Castelló, Christof Kurzmann, Christian Fennesz and others.

dieb13, also based in Vienna like Stangl, is a particularly active musician, filmmaker, software programmer and theorist. Being a valued improviser and a proven specialist for the musical and technical aspects of turntablism, he played and plays in various groups like Swedish Azz, Efzeg, (Fake) The Facts and collaborated with countless musicians from local and international scenes, among them Billy Roisz, eRikm, Phil Minton, Hans Koch, Mats Gustafsson, Camille Emaille, Anna Högberg, Susanna Gartmayer.

In 2002 Stangl and dieb13 released their duo album “eh”, which gave a very thorough and entertaining insight in the possibilities of interactions between guitars and record players. Now, 17 years later, on “Jardin Des Bruits”, or “Garden Of Noises” they explore and expand the sonic properties of their group sound and include plenty of soundscapes from Paris and Montreuil, where the recordings took place in May 2019. Burkhard Stangl once said that he allows himself to play his special so-called “eh”-tuning only in this project, because of its high emotional tension verging on nostalgia. A pair of tracks on “Jardin Des Bruits” sounds like a farewell to their sonic adventures from 2002 which they masterfully convert to their current musical ideas. Their themes remain particularly alluring and bruitfully fruitful as ever, with each track telling its own engrossing story. This is sharp, focused contemporary music of the kind, where minimalist motifs meet maximalist outbreaks. “Jardin Des Bruits” is another landmark recording made by two of the most prolific experimental explorers of sound and music active today.

Recorded at Instants Chavires and the streets and metro trains of Paris and Montreuil in May 2019.

Frayle's Gwyn Strang and Sean Bilovecky join the show to talk about their cathartic new album.