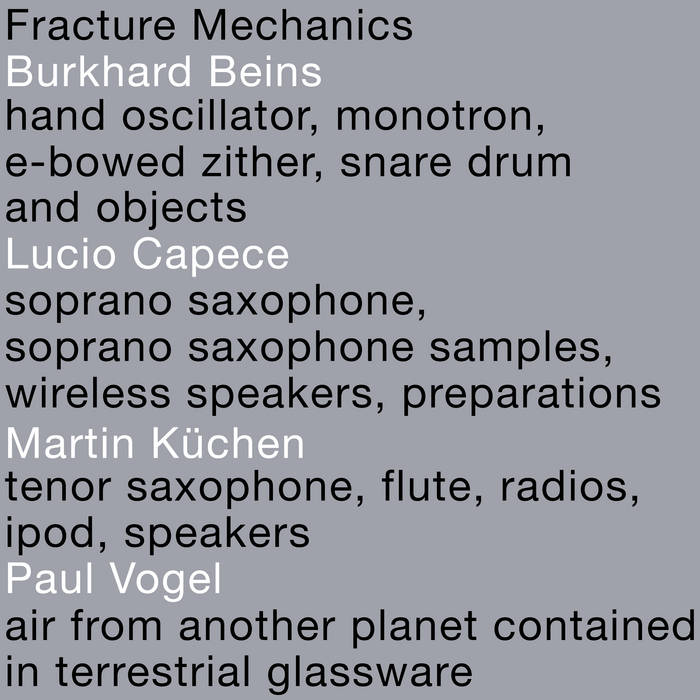 In October of 2014 Fracture Mechanics traveled to Ljubljana to play and record. The recording at Radio Student involved the transubstantiation of base liquids into nectar and thence by an alchemical process into music.

Fracture Mechanics, the scientific study of cracks in any form of material, is a well-chosen metaphor for the examination of music, sounds, shapes and their breaking points. The fact that this has given the word "fracture" a slight semantic degrading is of particular importance. Even more unorthodox expressions - such as "brötzmann-esque arousal" or "the buzzing valves à la Dörner"- will inevitably wear thin over time, so too the mechanics of sound - that is, the basic ideas about music and its performance must be subject to critical review and alteration. This quartet is particularly suited for such a task: Lucio Capece, Argentinian-Berliner perception worker (featuring on Echtzeitmusik Berlin and duo album with Chris Abrahams), Burkhard Beins, legendary echtzeitdrummer and Post-Punk fan (featuring on Echtzeitmusik Berlin, Glück's album, and Future Perfect with Serge Baghdassarians and Boris Baltschun), Martin Küchen, Lund based saxophonist and baguette baker (featuring on The Bakery, a duo with Keith Rowe), and last but not least, Swiss/Irish clarinetist and domestic glassware operator Paul Vogel (a new artist in our roster). Do not miss this excellent opportunity to become acquainted with some of Europe's most influential profiles when it comes to the treatment of drum-head friction, precise gurgling, conceptually static noises, analog synth putter, ultra minimalism, radio distortion aesthetics, and disassembled wind instruments.