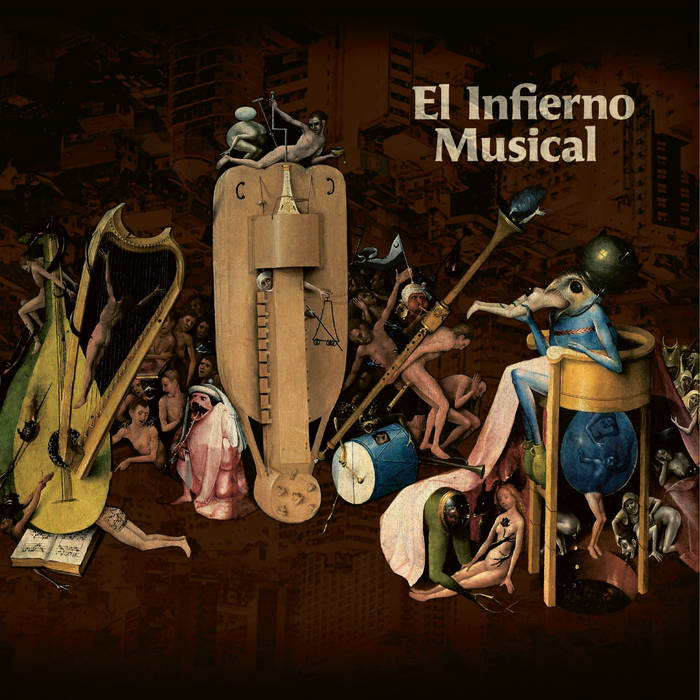 By inevitable coincidence, a street vendor in Buenos Aires became an instrument of providence, when he compelled attention of Christof Kurzmann, sitting outside a coffeehouse. His merchandise were small books of Hispanic writers, and the chosen one that ended up in the buyer’s pocket some six years ago was a collection of poems by Argentinean poet Alejandra Pizarnik. Her works abound with music and sounds or absence of it, appreciating silence. For Kurzmann, this served as a sufficient reason to dive into her writings, which resulted in releasing El Infierno Musical: a tribute to Alejandra Pizarnik in the fall of 2011. In accordance with the name of her book, inspired by a painting by Hieronymus Bosch, the eponymous disc uses The Garden of Earthly Delights on its cover.

El Infierno Musical as a quintet started back in 2008 thanks to a wild card given to Kurzmann as a birthday present by the organizers of Music Unlimited festival in Wels, Austria, which hosted its official premiere.

When Kurzmann was looking for musicians to join his project, the first invited was Martin Brandlmayr, an unmistakeable drummer and percussionist, based in Vienna. Be it in duo with Nicolas Bussmann (Kapital Band 1) or with another drummer Burkhard Beins in the influential international group Polwechsel, or in yet other renowned bands such as Radian, Trapist and Autistic Daughters, you’ll recognize him playing at any rate. Inconspicuous, yet amazingly complex repetitive rhythms in rather low dynamics but rich scale belong to his characteristic style of play, which holds also for El Infierno Musical.

The next member is saxophonist, clarinettist and composer Ken Vandermark, markedly renowned especially in free jazz circles. He is one of the most active free jazz and free impro players today. Past groups of significance include the Vandermark 5, Powerhouse Sound, DKV Trio, the Territory Band, AALY, the Vandermark Quartet, FME, and School Days. Currently, the majority of his work as a composer and improviser has been developed in Made To Break (in which Kurzmann appears as his sideman), Side A, Platform 1, Free Fall, and the Resonance Ensemble. In addition, he works on a regular basis with the total improvisation units Sonore, the Peter Brötzmann Chicago Tentet, separate duos with the percussionists Paal Nilssen-Love and Tim Daisy, Lean Left, iTi, and Fire Room. Each year brings additional new projects and collaborations, which expand the range of his work of which El Infierno Musical is an outstanding example.

Eva Reiter is without doubt one of the most active and diverse interpreters in Austria. The recorder and viola da gamba player is also very active as a composer, focusing especially on the field of contemporary music. Characteristic for Eva Reiter’s compositional work of recent years is the exploration of the fine line between acoustic and electronic music. Awarded as a composer with the “publicity prize” of the SKE, promotional prize of the City of Vienna in 2008, the Queen Marie José International Composition Prize 2008 and many other promotions. Selected works for the Rostrum of Composers (IRC) 2009. Eva Reiter’s compositions were performed at international festivals such as Transit/Leuven, Ars Musica in Brussels, ISCM World New Music Festival 2006/Stuttgart, generator and Wien Modern/Vienna Konzerthaus and others. She regularly performs at renowned festivals of classical and contemporary music. Currently, numerous concerts as a soloist and performances with various baroque orchestras (including De Nederlandse Bachvereenigung), Ensemble Mikado, Le Badinage, Unidas and ensembles for contemporary music (Ictus, Klangforum Wien, Trio Elastic3, Duo BAND and others).

Inspired by the sound, velocity and social movements of jazz, Clayton Thomas has dedicated his musical life to finding a personal truth that links his own cultural life as a white Australian, with the radical, far reaching pursuits found within the creative music. What he can’t find as a bass player, he searches for in the organisation of unreasonably large ensembles as 24 bodies Splitter Orchester. Thoughtful and virtuosic prepared double bass playing has taken Europe by storm since moving there from Sydney in 2007 – part groove cannon, part kinetic sculpture. Clayton Thomas plays key role in many other projects like power trio Ames Room or Anthony Pateras‘s quintet Thymolphtalein.

Christof Kurzmann is a musician and composer who expresses himself mainly with a laptop, clarinet and voice, subtly outspread between electro pop and improvisation. His recordings include discs released on his own label Charhizma (e.g. Dafeldecker/Kurzmann/Fennesz) as well as on many other important labels, such as Potlatch (The Big Misunderstanding Between Hertz and Megahertz with John Butcher), Erstwhile Records (Schnee with Burkhard Stangl or Aso with Ami Yoshida), Staubgold (The Magic ID’s I’m So Awake / Sleepless I Feel), Mikroton (Hammeriver), Musica Genera, Syntactic, Morr etc.

He has already proven how good he is in composing samples instead of notations (e.g. Neuschnee, I’m So Awake / Sleepless I Feel), but this time he shows a breathtaking mastery.

The album brings a clear structure filled with improvised parts, masterly played by perfectly coordinated musicians, who take advantage of their miscellaneous musical histories and styles. Were we to analyse the whole in bits and pieces, we would find a variety of genres, but all has been put together in a close dramaturgy that makes the songs cyclical and indescribable in terms of genre. Not only the musical idea evolves here, it is also subject to metamorphoses in several blocks, often counterpoint, which bring about its final appearance in its pure form again. A good example of this process is Diana’s Tree, which has a dramatic peak in free jazz performance, but evolves from lyrical tonal melodies played by clarinet over elliptic recurrent drum figure, followed by a sudden cut and a country music allusion, then free jazz and then back, again and again in blocks. Cold in Hand Blues can serve as another example, beginning with a dialogue of drums and double bass, used percussively, joined by saxophone and voices after a while. Voices, male and female, interact and create a dramatic effect. Sudden entry of the dan bao (an Vietnamese single-stringed violin) in rock dynamics brings a palpable relieving that refers to the function of genre shifts within the compositions. Voice (from singing, declamation to plain speaking) as a crucial formational element with a dramatic potential comes forth especially in the last track, Ashes II, when the imaginary stage is entered by the dead poet herself: recording of her voice is subsequently „commented“ by Kurzmann.