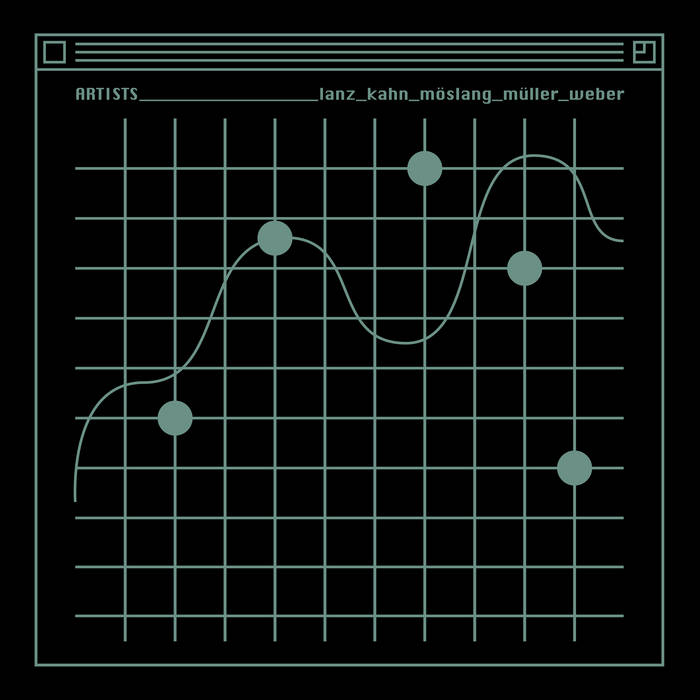 Joke Lanz was born in Basel in 1965 and now lives in Berlin. He is a pioneer of the electronic independent scene and a crossover artist whose work spans improvised and experimental music, noise and turntablism, performance art and musique concrète. In addition to theatre and film music, radio works, installations and objects, there are two constants in his work: turntablism – making music by manipulating vinyl records; and his action project “Sudden Infant”, which was transformed into a trio in 2014 after 25 years as a one-man operation. “kangaroo_kitchen” is his first album on Mikroton.

Originally from Los Angeles, multiinstrumentalist Jason Kahn has lived in Europe since 1990, he plays a wide range of instruments like percussion, drums, synthesizer, laptop, guitar, and voice. He has performed or recorded with musicians such as Günter Müller, Norbert Möslang, Kim Cascone, Arnold Dreyblatt, Steve Roden, Dieb13, Richard Francis, Ryu Hankil, Jon Mueller, z’ev and many others. He ran the Cut label from 1997 to 2008, releasing 25 albums. “Kangaroo_kitchen” is his sixth album on Mikroton after “Limmat” with Günter Müller and Christian Wolfarth, “Planes” with Asher, "Five Lines" with Casey Anderson, Norbert Möslang, Günter Müller and Mark Trayle, “teplo_dom” and “Instants // Paris” with MKM.

Norbert Möslang had been playing in Voice Crack duo with Andy Guhl in 1972-2002, they’ve been working with “cracked everyday-electronics”, modifying and recontextualising the use of home electronics. After the split he continued working solo and in different musical combinations using “cracked everyday-electronics”. He released numerous solo albums as well as collaborations with Günter Müller, Jason Kahn, Ralf Wehowsky, Tomas Korber, Aube, Christian Weber, Katsura Yamauchi. He is a part of Signal Quintet and MKM. “kangaroo_kitchen” is his seventh album on Mikroton after “Ground” with Kurt Liedwart and Günter Müller, "Stodgy" with eRikm, "Five Lines" with Casey Anderson, Jason Kahn, Günter Müller and Mark Trayle, “sale_interiora” with Kurt Liedwart and Ilia Belorukov, and “teplo_dom” and “Instants // Paris” with MKM.

Günter Müller, formerly a percussionist and known for his unique explorations of the possibilities of drums and percussion using electronic devices and self-built instruments, now concentrates on his setup of two iPods and electronics. For thirty years he’s been a part of innumerable projects, including long-term musical dialogues with many musicians like Jim O’Rourke, Norbert Möslang, Andy Guhl, eRikm, Oren Ambarchi, Toshimaru Nakamura, Keith Rowe, Ralph Steinbrüchel, Philip Samartzis, Alfred 23 Harth, just to name a few. He used to run the critically acclaimed For 4 Ears, a label for improvised electronic music. This is his seventh release on Mikroton, following his solo album “cym_bowl”, “Limmat” with Jason Kahn and Christian Wolfafth, “Five Lines” with Casey Anderson, Jason Kahn, Norbert Möslang and Mark Trayle, “Instants // Paris” and “teplo_dom” with MKM, and “Ground” with Norbert Möslang and Kurt Liedwart.

Christian Weber studied at the University of Music and Performing Arts in Graz and at the Bruckner Conservatory Linz with Adelhard Roidinger, as well as with Ernst Weissensteiner in Vienna and with Mark Dresser in New York. Weber focuses on electroacoustic improvisation (EAI), chamber music, jazz, pop and rock. In his music these different styles influence each other continuously. Weber's cooperation with various musicians such as Lol Coxhill, Peter Evand, Pierre Favre, Charles Gayle, Hans Koch, Peter Kowald, Joachim Kühn, Oliver Lake, Urs Leimgruber, Irène Schweizer, Eliott Sharp, Otomo Yoshihide and many more is documented on over 100 recordings. This is his second album on Mikroton following Michael Thieke Unununium’s “Nachtlieder”.

Two tracks of the album were recorded respectively in Kaliningrad and Moscow with no concerts in Kaliningrad and a premiere gig in Moscow. “kangaroo_kitchen” is a masterclass not only in instantaneous sound design and dynamic range, but also in sonic depth. Five musicians work for the first time in such a mesmerizing manner as if they have been working together for years. The weaving in rich and complex meshes of tone clusters and noise loops, Russian radio invasions seamlessly blending with sonic creatures from turntables and skillful double bass playing. A wide array of striking timbres and sounds wash over one another, at times sounding like innards of a factory, at other times like originating from outer limits of space.

Disc 1 was recorded 25.09.18 by Kurt Liedwart in Kaliningrad
Disc 2 was recorded 28.09.18 by Maxim Khaikin in Moscow
Both at Mikroton Mikroten Festival